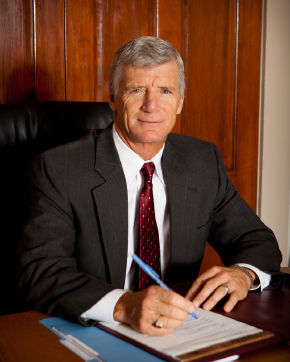 Pursuing the positive aspects of law.

Rick Zier grew up in Boulder, Colorado and attended Colorado College on a Boettcher Scholarship, graduating in 1973 with distinction, cum laude. During college, he received a Ford Foundation Venture Grant for thesis research in Europe, played baseball, captained the rugby team, and was president of Phi Gamma Delta fraternity. Between college and law school Rick worked as an operator for the Colorado & Southern Railway in northern Colorado. Completing his law studies at the University of Texas in Austin in two years, he obtained his J.D. in 1977. While in law school he was on the staff of The Texas International Law Journal and The Texas Urban Law Review.

From 1978 to 1991, he was an associate and later a shareholder in the Fort Collins firm which came to be called Harden, Schmidt, Hass & Zier. A private office, the firm also represented Larimer County, and Rick’s practice consisted partly of advising various County departments and sitting with the Board of County Commissioners and the Board of Adjustment in public hearings concerning zoning and subdivision matters. He also was a supervisor of the legal work for the Department of Social Services (now Department of Human Services) in matters concerning child and adult protection. His work for private clients involved business and real estate transactions, wills and estates, and civil litigation. He also represented Poudre School District R-1 in the acquisition of school sites and construction of numerous public schools under two large bond issues. In 1992 Rick established Zier Law Offices, a general civil practice emphasizing land use and zoning, contracts, business, wills and estates, and local government law. His interests have expanded now to include all of the areas of practice described on the home page. He is Town Attorney for Kersey, Colorado.

Rick has been involved in the community in many ways. He was co-developer of the Springfield Court affordable housing project, a 63-unit apartment complex in Fort Collins catering to single mothers with multiple children. He was a co-founder of the Poudre School District Sidekicks program, which arranged for employers to release employees once a week to mentor students in local schools. He has been a member of the Fort Collins Lions Club, an Odyssey of the Mind coach, and a long-time manager of competitive youth baseball teams, and he founded the Fort Collins-Loveland Baseball Association. He is a past Baseball Commissioner for the Colorado State Games. Having an abiding interest in small business, Rick has owned two Baskin-Robbins ice cream stores in Fort Collins.

He and his wife, Britt, a recruiter for disaster relief teams of Samaritan’s Purse, have five grown children. Mallory has one child, a son, and they live in Fort Collins, where she works for Otter Products as an executive assistant. Connor, his wife, and their son reside in Southern Illinois. He is a program manager for General Dynamics. Virginia resides with her husband and two sons in Fort Collins. She is an RN and works in risk management at the Medical Center of the Rockies. Ryan, unmarried, is soldiering through a Ph.D. program in education at a Midwestern university. Justin, also unmarried, is a data scientist with a large American company in the Southwest. In their spare time, Rick and Britt enjoy running, hiking and bicycling, theater and concerts, reading, and travel. Rick has run more than a dozen marathons and many other shorter races and has climbed all of Colorado’s fourteeners. In 2014 he earned a Master’s degree in history from Colorado State University.